Skip to content
Mind. Your Business > Blog > Business > When You Write About Other People, Own Your Sh*t 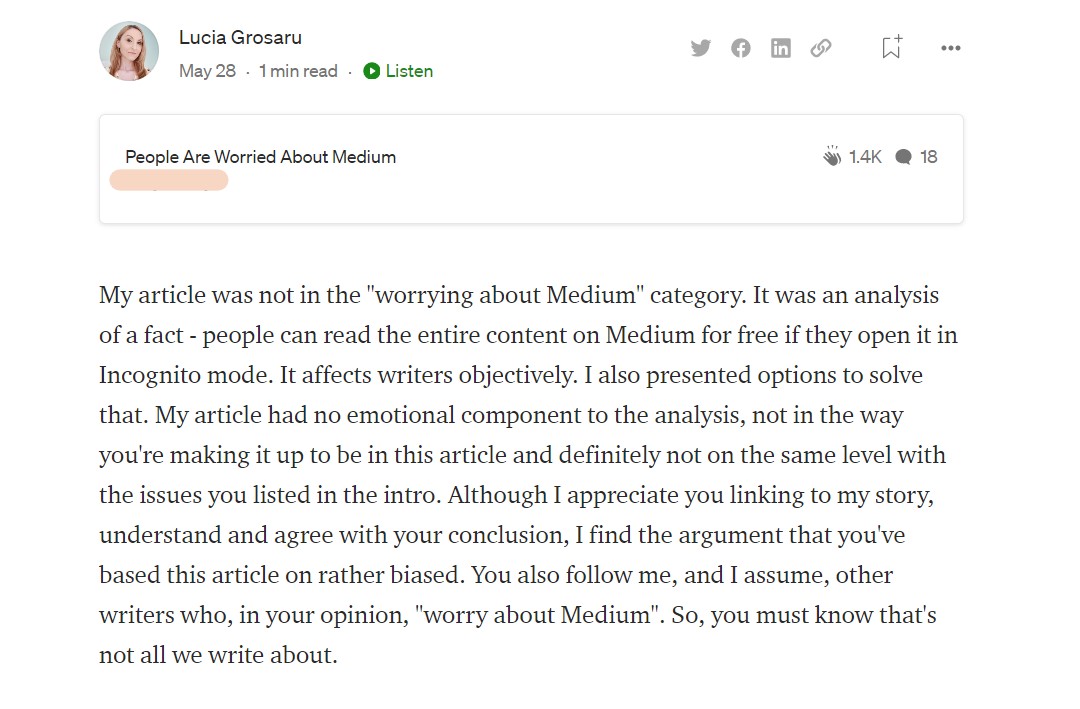 Responsibility is a word some writers on Medium do not know. It’s time they learned it.

If the idea of criticizing in writing other people — or businesses — ever crosses your mind, make sure you handle the reactions to your claims better than the Medium Writer that “inspired” this post.

Yesterday, someone who followed me — and who for some reason, I followed back for a while —, decided to mention one of my stories about Medium in a passive-aggressive post of theirs — meaning, they wanted to present it as a positive, sunny message to everyone but was in fact an unjustified, aggressive piece toward a rather large number of other Medium writers.

I’ve read and reacted to her story, and now I have more thoughts on the topic, which I am going to share here, for reasons that will become clearer as you continue reading.

But first, a short comment regarding my general attitude and opinion toward criticizing messages such as hers:

In my view, if you want to write an article centered on constructive criticism, make sure that:

In a nutshell, I fully encourage the expression of critical opinions, as long as they are informed opinions, stemming from an honest perspective.

Back to the situation I had to deal with yesterday.

A few days ago, I published this story titled “Medium Should Change This One Thing To Increase Subscription Numbers and Writer Earnings”.

Medium Should Change This One Thing To Increase Subscription Numbers and Writer Earnings.

I published several pieces in which I address various aspects of publishing online in general, or on specific platforms, in particular.

In this particular story, I analyzed a fact — how users can read any and all Medium content for free, forever, as long as they open it in an Incognito browser window.

I also linked to a story of another writer, who’s been here for a longer period of time, and who addressed a different issue with the platform.

Enter Medium Writer who doesn’t know how to write a critical piece, nor how to handle feedback for it.

It’s easy for you to search for the article and discover her name — I won’t share it though, it’s not really important to the story. It’s a phenomenon, this individual’s actions just happened to be a good way to explain my perspective.

I’ll use M.W. to identify her throughout my article. Yes, from Medium Writer. I know, very original.

Satire and other forms of humor may be used to portray this otherwise idiotic situation.

So, M.W. saw my story, and the additional one I mentioned in it.

Lightbulb in the mind of M.W.: “I can use this to my advantage and write about it.”

*snatches links to my article and to the other one*

“I need to give it my own spin… hmm… These people worry so much when they can just see the world with a pink lens on all the time. This is my brilliant take: I’ll criticize writers who worry about Medium. I’m all Light, let’s trash these negative individuals”.

“Work almost done. Now, since I made sure I listed plenty of other stories and people will scroll forever on my story and get me the reading time, I only need to slap an intro and a clever outro on this brilliant piece”.

“Uhm… let’s see. What other things do writers worry about? Uhm… basic shit like.. views, and will people like my stuff, and will I make money…Intro done. Whew.”

“Now, for the grand finale, I need to sound smart. And luminous. Because I’m Light when all these people are is darkness., because I said so.. in the intro.”

“Uhm… clever, clever… think clever, luminous stuff… Oh, almost forgot. Let’s make it seem like I’m not just criticizing them, cause FFS, I’ve read their crap, and clapped, and commented, and I linked to it, so I consume that content… *slaps one line where she says she also engages in similar behavior as the writers she just criticized*. Back to clever and luminous. I know! Let’s use two clichés in one grand conclusion… because I can. Sunshine vs. Thunderstorms. Light, darkness, brilliant. And a snarky remark as the second cliché— get out of the house and find more subjects to write about than Medium. So clever. SO luminous. Referral link.Tags. Metered. Publish. Yes!”.

“Let the money roll in cause at least the idiots I tagged will click on my story. Let’s hope they are paid subscribers. Heh, that’s why I tagged plenty of them!”

I fucking clicked to read, d’oh.

I hated the thing from the title but I hoped it was just to get the clicks on it.

Nope, the whole thing was a poorly-written misrepresentation of my message and at least the message of several other writers M. W. tagged.

She kept labeling articles such as mine as “worrying” — in general about writing, or about Medium specifically.

I wasn’t and I’m not worried about writing, nor about Medium. Never expressed that range of emotions regarding my stories — they were objective analyses. They’re facts that affect content creators who chose to publish over here.

She was making it all up to be about this crowd of inexperienced, negativity- and anxiety-driven writers who can’t write about anything else than Medium.

I’m the first story she linked to. The one I mentioned in my post, was second.

Hard work for her there, eh?

A stupid conclusion about why she’s not worried — Medium made it through it all until now, changes can be good, “anything is possible” in capitals.

Yawn… and my cents still go to her.

But by this time I’m annoyed because she had no decent take on any of our articles. Slapped them on there, and invented a plot.

A plot that she was planning to link to her conclusion. But she failed to even do that. The intro assimilates writing in the “worrying about Medium” category to justified anxiety of beginner writers — which myself and the author whose post I linked to, are not, by the way — and the conclusion was about the pink-hue of it all.

For M.W., writers who criticized Medium can only see the thunderstorms, while she, the luminous one, recommends you focus on the sunshine.

And then came the last paragraph — the stupid “get out of the house to find more things to write about”.

Now, you can be as snarky as you want but don’t fucking lie.

This was insulting not because of what she said, but because she continued to refer to a context that only existed in her head. I thought to myself “She follows me. She knows the variety of topics I write about. Maybe she follows some of the other writers she tagged here. She’s dishonest, and purposefully misleading her own audience, to get the claps and comments. She’s lying, trashing us to make herself look good”.

So I decided to comment the thing that you can see at the top of this page.

Her Reaction and What Prompted This Very Story

If you ever write something similar, or that’s even remotely in the field of criticism, don’t do what she just did. Have some decency and be responsible regarding your claims.

Now, I definitely expressed my discontent regarding her take. I found her perspective biased — she assumed that objective analyses had an emotional component, we were worried. That, together with the insulting conclusion, made for a rude, unsubstantiated piece of writing. Several more points of analysis, below.

Back to her reactions now.

She could’ve responded to my comment and defended her take. But did she even do that? No. What did she do instead? She fucking clapped for my comment, as a start. What the hell is that?

I couldn’t see how many claps though… You know why? Because she had also hidden my reply. “What a coward”, I thought at that point.

But did she stop? No! She also deleted her reference to my story and the link. There, the problem is gone. Isn’t she smart? My honest answer? No, she’s not. She’s passive-aggressive. Taking no responsibility for her own aggressive stance while attempting to picture herself as the luminous figure I mentioned earlier. Crappy behavior, don’t do that.

Why She Was Wrong From The Get-Go… And Beyond

One more thing to mention is that she has about 2.8K followers. In comparison to my 160, give or take, that may seem such a great result, right? You might think “I’d rather do what she did, to get there”… Uhm… worth mentioning she’s following about 7.6K people. So… perspective on her “success”.

Anyway… I unfollowed her after posting my comment and she unfollowed me “back” today, when she ran from it all. Full circle for this interaction.

If you cannot handle what’s to come as a result of your criticism, maybe you just don’t have what this niche takes.

You don’t have them, Sunshine.

Don’t do what she did.

This article was originally published on an external platform on May 29, 2022.